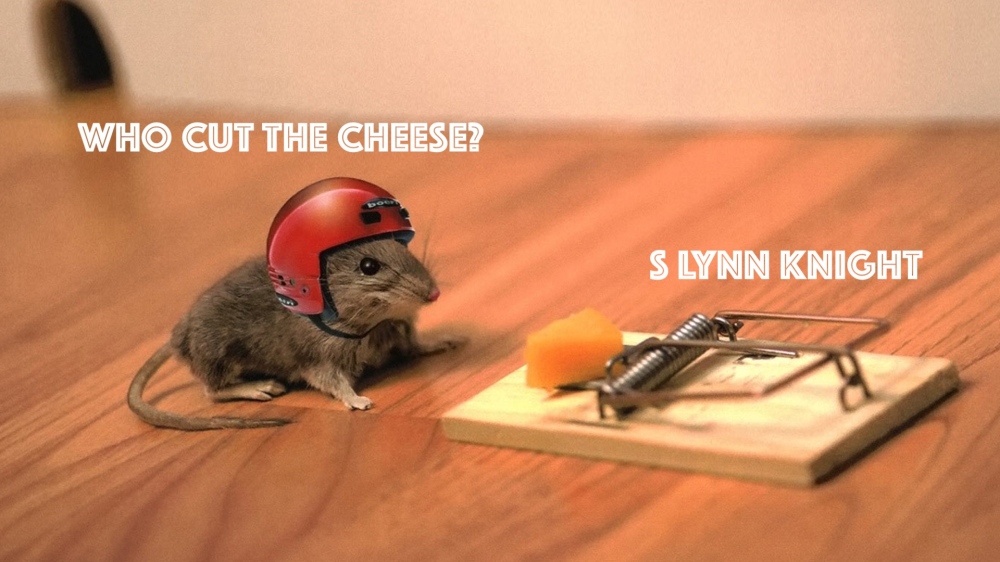 Who Cut the Cheese?

The general wretchedness of Mondays was further cemented by the rain pummeling the roof of the two bedroom cottage, but he still loved them.
Atlas smoothed the wiry charcoal hair camouflaging thinly boned arms and buttoned each cuff. Meticulously, he tucked a wild hair up the custom tailored sleeve, straightened the silk bowtie pinned below a clean shaven Adam’s apple. Atlas stepped back to appraise himself.
The mirrored door of the medicine cabinet framed the countenance of a slight man who reminded one more of a rodent than an accounting supervisor. To be fair, he was born in the Year of the Rat, and so were his parents, so it was not a wholly unkind observation.
His nose, a most distinguishing feature, came to an unnatural and bulbous point which made one suspect he might be apt to sniff you out before you ever entered the room. As such, he was ever poised and waiting behind the oversized desk when a co-worker came to call.
At the slightest whiff, Atlas would halt his work and rest his delicate hands atop one another where they would hover in the air above his desk. This is how they always found him. Usually, it was a simple request for Atlas’ lunch order, which had never once changed in all the years he’d worked for the Cheshire Accounting Firm.
#Say cheese please
‘A cheese sandwich and a seltzer water, room temperature, please. That’s all, thank you,’ he’d politely respond then resume tapping at his computer keyboard.
It was Ermine’s week for the lunch run. Ermine was, how to put it gently, obnoxious and lazy. Everyone in the office agreed, but she had her priorities and auditing was high among them. She was the best they had. Nevertheless, when the warm afternoon sun came streaming through the window, Ermine could be found stretched out on the sill beside her desk doing nothing more than studying her nails. To everyone’s disgust, she would sometimes groom herself in plain sight. According to the janitor, a day or two after this unabashed display of vanity, she would usually develop a hacking cough and yack into the wastebasket beneath her desk.
Ermine made scant little effort to hide her feelings for her supervisor. After confirming his lunch order, she drifted from his office door with a languid show of avarice. She had had enough of this little rodent man ordering her around. Today he’d feel the pain of his own hubris, she thought to herself as she padded quietly away.
Ignoring Ermine’s attitude, Atlas returned his attention to the spreadsheet on the screen. The ordered budget cuts had caused him a restless night, and now they were continuing to torture his morning. Someone had to be laid off, his boss had spelled it out. Cut your department’s budget, or you’ll be eating your cheese sandwiches in the unemployment line.
As clever and resourceful as he was, he’d felt trapped and this simply would not do. It would be easiest to lay off Ermine since he was well aware of her distaste for him. However, she was one of the best auditors the company had, and he could not bring himself to fire her based on his personal feelings of distrust.
Atlas thought a walk might clear his head. Just before lunchtime he scampered out the side door into the stairwell and down to the street.
Like a tomcat on the prowl, Ermine slunk around the corner of her supervisor’s office door and quietly shut it behind her. The office was deserted for lunch and Atlas had taken a rare break. It was now or never. She carefully opened the top right desk drawer and gingerly placed the mouse trap well into the shadows. The trap was set with Limburger, the smelliest cheese she could find. As she bent to listen, Ermine closed the drawer in short increments to be sure the trap remained ready to snap. Satisfied with her efforts, she slipped from Atlas’ office undetected.
“Ermine, where’s my lunch, please?” the speaker on her desk crackled to life with Atlas’ thin voice.
Ermine pressed the intercom button and sweetly purred, “Oh, since you were out, I put it in your desk drawer to keep it fresh.”
“Ah, thank you Ermine, that’ll be all.”
Still waffling over the decision of who would be fired, Atlas slipped open the drawer to his desk, which had begun telegraphing the delicious scent of cheese toward his twitchy little nose.
“SNAP! YEEEOOOWWWWWWeeeeeeeeee! Thhrrrrrruuuuuppppppffftt!”
The pain was so sudden and intense, Atlas to let go a scream followed by a noisy stream of flatulence.
For the second time in five minutes the intercom on Ermine’s desk crackled to life.
“Ermine, could you come into my office?” Atlas squeezed out the request as calmly as he could given the intense pain clamoring through his right hand and up to his brain.
“Right away,” Ermine purred and clicked off.
She’d barely gotten the door to his office closed when Atlas pointed the mousetrap, still clamped to three of his mangled fingers at Ermine, his best auditor, and ask, “Do you know anything about this?”
“About — whaa….whaaaat’s that smell?” Ermine demanded, waving a hand in front of her face.
“Don’t play cat and mouse with me, Ermine! This!” Choosing to ignore the obvious question hanging in the air, he shook the mousetrap firmly attached to his hand at her and grimaced again.
Ermine looked out the window, distracted by a robin. Office politics were usually such a bore. “Well, are you going to fire me or not?” she sighed, hiding behind a subterfuge of boredom.
Not for the first time that day, Altas felt backed into a corner. “Get out! And no more lunch runs for you!” Atlas shouted, turning slightly to cover a tiny smile.
He would never let Ermine know how much he enjoyed playing cat and mouse with her no matter how many times he lost the game.